Arniston, which lies to the north-east of the mouth of the Heuningnes River, was named after a ship that was wrecked there in May 1815. It is also known as Waenhuiskrans after the enormous cavern eroded in the limestone cliffs approximately 2 km south of the town. It is believed that the name “Heuningnes” originates from the presence of a beehive in a cave on the bank of the estuary.
Soetendalsvlei, the vlei which flows into the Heuningnes River, and the farm Zoetendalsvallei situated around it, were named after the Zoetendal which was wrecked on the adjacent coastline in 1673.
During 1986, De Mond was proclaimed as a Nature Reserve and in early 1991, De Mond became a satellite station to De Hoop Nature Reserve, of Cape Nature Conservation.
Between 1974 and 1975, a suspension bridge was installed across the Heuningnes River, approximately 1.5 km from the mouth. The Heuningnes Estuary
The Heuningnes Estuary, or De Mond, has two major tributaries. These are the Kars River and Nuwejaars River (the latter flows into Soetendalsvlei, the overflow from which has a confluence with the Kars River). The length of the river from the mouth of the Heuningnes, to the confluence of the Kars River, and overflow channel from Soetendalsvlei is 15 km.
A typical estuary will contain fishes belonging to three categories, namely:
a) marine migrants which breed at sea and typically use estuaries as nursery areas,
b) estuarine species which spawn in estuaries and usually spend most of the lives in estuaries
c) freshwater species which may enter estuaries when salinities are low
All three of these groups have been recorded in the Heuningnes Estuary or De Mond, during fish surveys that have taken place since 1943. 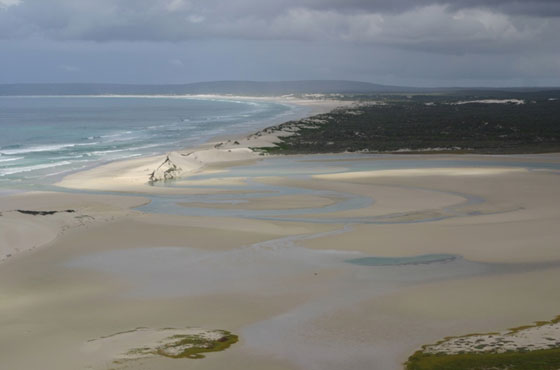 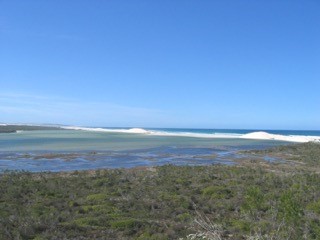